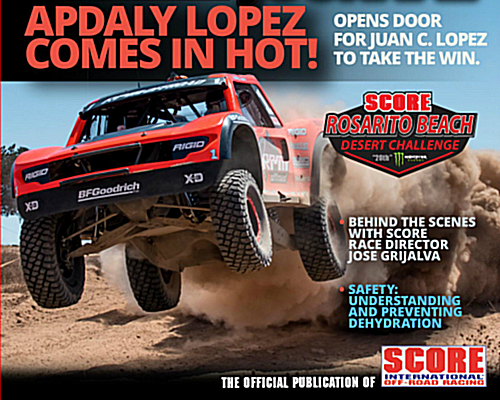 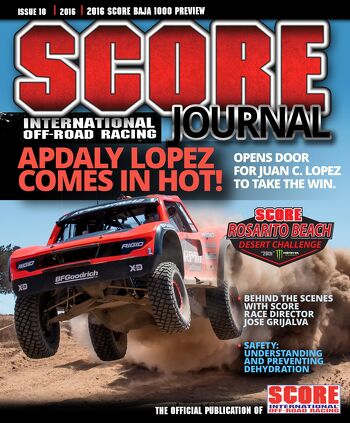 ENSENADA, Mexico — The first ever SCORE race held in Rosarito Beach, Mexico highlights this month’s Volume 2, No. 10 of the acclaimed SCORE Journal, the colorful monthly on-line digital magazine of SCORE International that is now live on the SCORE website at www.SCORE-International.com and is available through SCORE social media channels as well as a direct link at http://scorejournal.digital.

Each issue is packed full of more interesting stories, features, notes, photos and video clips saluting the four-race 2016 SCORE World Desert Championship as well as the industry itself.

“Between the numerous trade shows and preparations for all of the festivities surrounding the upcoming 49th SCORE Baja 1000 this is truly a very special and very busy time for SCORE International,” said Jim Ryan, SCORE Director of Marketing and Sales. “This issue of the SCORE Journal presents a thorough look at much of what is going on in the SCORE nation with some insightful, entertaining interactive stories and features.”

“A very informative feature is from Dr. Terry Trammell when he spoke on the very important topic of Dehydration at this summer’s Stand 21 SCORE Safety Seminar in El Cajon, Calif. Another exclusive read is a Q and A with SCORE’s personable Race Director, Jose A. Grijalva.”

Vol. 2, No. 10 of the SCORE Journal is again filled with several interesting must-read features and news items.

Additional key features are an in-depth preview of next month’s 49th SCORE Baja 1000, the iconic granddaddy of all desert races and a great story on the Fab School metal fabrication program.

Capping off the 2016 broadcast season, the SCORE Baja 1000 broadcast on the CBS Sports Network will air as a full two-hour special for the second straight year.

This new internet series delivers a unique inside look into what racing in SCORE is all about!  Think of it as bringing the SCORE Racer Briefing to life!  These videos, including archive footage and new interviews with current racers, will inform, educate and entertain across every topic that is important and instrumental to the SCORE racing world.

This new series is all about Action, Action, Action!  Each episode will feature the ultimate in high octane highlights from SCORE race action, past and present.  Tapping into the vast SCORE archive, as well as current television footage, SCORE All Out is the No. 1 source for the best in SCORE racing short-form action video highlights.   Great editing, high energy soundtracks, cool interviews – this will be the highlight series that will make all the other (pirated) stuff online look like junk.  The focus will always be on generating exciting and driving racer registration – so we’ll work to do that through timing and scheduling, etc.

From award-winning documentary filmmaker Dana Brown, Dust2Glory will chronicle each of the four races in the 2016 SCORE World Desert Championship. Now, D2G, which began shooting at last year’s SCORE Baja 1000, continued at this year’s SCORE San Felipe 250 and the SCORE Baja 500, will be up close and personal in capturing the robust racers in their amazing adventures in Mexico’s majestic Baja California peninsula through all four spectacular 2016 races.