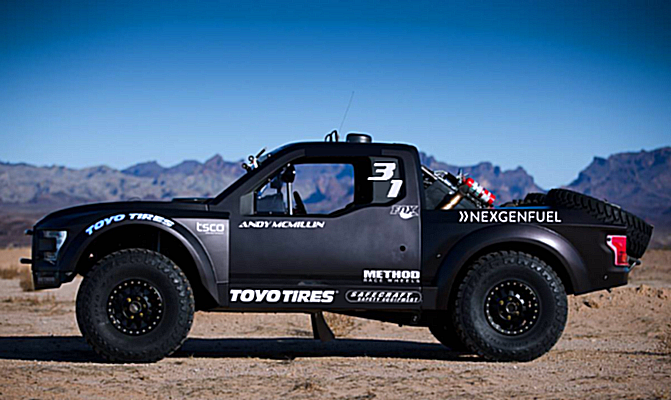 Pittsburg, Calif. — Safecraft Fire Suppression Systems, the racing industry’s standard for fire safety for over 20 years and relative new-comer NeXgen Fuel, provider of “NEXDIESEL,” the best alternative renewable diesel on the market have teamed up to sponsor 5-time Baja 1000 champion Andy McMillin (Trophy Truck #31) at BITD’s “Vegas to Reno” (Aug. 16-19) as well as the SCORE International Baja 1000 (Nov. 16-20), where McMillin will be paired with 13-time Baja 1000 champion and Off-Road Hall of Fame Inductee Larry Roeseler, Team Manager of NeXgen Fuel Racing. The duo will be campaigning for the Baja 1000 Overall victory in McMillin’s TSCO built Trophy Truck and will be helping test and develop NeXgen’s new diesel powered Trophy Truck which is set to debut at the 1000. This will be the first time the sports two winningest Baja 1000 drivers have teamed up, immediately making them a pre-race favorite.
Safecraft, an established, highly successful company, consistently delivering time-proven results and revolutionizing the fire safety standard together with NeXgen Fuel, an up and coming company that increasingly delivers outstanding, cutting-edge alternative fuel at the forefront of success parallels the companies’ strategic alignment with top drivers Larry “The Legend” Roeseler, a multi-time champion and off-road Hall of Famer and now, Andy McMillin, a multi-time champion in his own right and the youngest person to win the Baja 1000 Overall as well as being tied for most Baja 1000 Overall victories in a 4-wheel vehicle with five.
“The partnership is a winning combination all around,” said Pat O’Keefe, President and CEO of Safecraft and NeXgen Fuel. “Safecraft is the leader in fire suppression systems; NeXgen Fuel is the leader in diesel technology and Andy McMillin and Larry Roeseler are two of the winningest drivers in the history of the Baja 1000. They all have what it takes to succeed and win.”
Safecraft/NeXgen Fuel will be announcing shortly who will be behind the wheel of their in-house Trophy Truck #20 in November to round out their two pronged attack of the 49th Anniversary of the Baja 1000. This will be the first time in racing history that anyone will be running NEXDIESEL Renewable Diesel as a fuel source.
”Being at the forefront of technology in off-road racing is my passion and strategically partnering with Safecraft and NeXgen Fuel is an exciting opportunity,“ said Andy McMillin. “These companies are used to pushing the envelope without sacrificing quality or safety. They’re in it to win and so am I.”
###

About Safecraft Safety Equipment
Safecraft Safety Equipment is the leading provider of fire suppression systems and is used by most of the top professionals in a wide range of industries including Motorsports, Automotive, Aviation and Marine. For over 20 years, Safecraft is known for its innovative design and use of the highest quality components available.
Safecraft extinguishers are used by more NASCAR, NHRA, NASA and SCCA teams than any other brand and is the only manufacturer to have 4 models of extinguishers and several different extinguishing agents approved to SFI 17.1
Visit www.safecraft.com for more information.

NEXGEN Fuel is dedicated to distributing and marketing the highest quality, next generation fuels to private and public fleets, consumers and environmentally-conscious organizations. The first NEXGEN Fuel to be offered is NEXDIESEL Renewable Diesel, a superior quality diesel fuel. Learn more at www.nexgenfuel.com.

About NEXDIESEL Renewable Diesel
NEXDIESEL Renewable Diesel by NeXgen Fuel is produced from 100% renewable and sustainable raw materials. (Note: It is NOT Biodiesel, a common misperception). This low carbon fuel has the same chemical properties as petroleum diesel and meets the petroleum diesel specification (ASTM D975) yet is petroleum-free. This premium quality, dynamic fuel allows fleets to seamlessly switch without additional investment or engine modifications. In addition, renewable diesel burns cleaner equating to a reduction in maintenance costs and a significant reduction in emissions.

About Andy McMillin
Andy McMillin is a third generation off-road racing prodigy. Andy’s passion for off-road racing began at the age of 2 when he started going to Baja to “pre-run” the race courses in the back of his dad’s Ford Bronco in a modified car seat. His racing career began at the age of 14 driving Class 1 Unlimited Buggies in the FUD series in Plaster City, CA. Andy officially drove his first SCORE Baja race in 2003, where he and his family were featured in the ‘Dust to Glory’ film. In 2006, Andy progressed to the premier Trophy Truck class and that same year became the youngest driver to win the Baja 1000 Overall title. At just 29 years old, he is tied for most Baja 1000 Overall titles in a four-wheel vehicle in the history of the sport with five (2006, 2009, 2011, 2014, 2015). Andy is also one of the few drivers in the sport who have won Baja’s Triple Crown Overall in a four-wheel vehicle: the San Felipe 250 (in his Class 1 car), Baja 500 and Baja 1000. Andy has had success in the United States races as well, having won the Parker 425, Nevada 1000, Vegas to Reno 1000 and is one of the few drivers who have won the infamous Mint 400 Overall twice. Andy has an unheard of winning percentage of 35% and podium percentage of 54%, proving his place amongst the greatest the sport has ever seen.

About Larry Roeseler
Larry Roeseler is an American professional off-road racer in motorcycle and Trophy Truck classes. He is a 13-time overall winner of SCORE’S Baja 1000, and has also won numerous times in the Best in the Desert Series. Roeseler is 2-time overall winner of the Las Vegas to Reno and has numerous American Motorcycle Association off-road titles including National Hare and Hound and National Enduro championships. Larry Roeseler is a Hall of Fame Inductee of the American Motorcycle Association and an Off Road Motorsport Hall of Famer. http://score-international.com/legends-larry-roeseler/