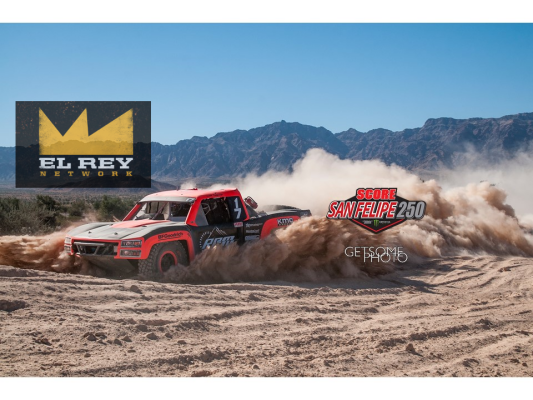 ENSENADA, Mexico – Taking another dramatic leap into the future, SCORE International has announced that it has signed an agreement with El Rey Network of the United States to televise domestically the four-race 2017 SCORE World Desert Championship in Baja California, Mexico along with the special SEMA SCORE Baja 1000 Experience and SCORE Baja 1000 qualifying in Las Vegas.

SCORE TV shows will continue to air internationally through syndication.

The internationally-televised 2017 season also marks the 50th anniversary celebration of the legendary season-ending SCORE Baja 1000, the iconic Granddaddy of all Desert Races to be held in mid-November. The SCORE Baja 1000 is the longest continuously held desert race in the world. And SCORE is the World’s Foremost Desert Racing Organization.

“SCORE is extremely enthusiastic regarding the potential of this TV agreement with the El Rey Network,” said SCORE CEO/President Roger Norman. “Desert racing is the original extreme sport and the El Rey Network reaches a demographic that is very important to SCORE and our sport. We welcome the opportunity to be the first programming of this kind on the El Rey Network and we anticipate and long and rewarding relationship.”

Entries continue to climb as the deadline to register in time for the start draw is Wednesday for this month’s 31st annual SCORE San Felipe 250 desert race in Baja California, Mexico.

Early entries from 22 U.S. States, host Mexico, Austria, Canada, Germany and Guatemala are preparing for the popular season-opener. The event will be held March 29-April 2 in San Felipe, the quaint fishing village on the Sea of Cortez, 125 miles south of the U.S. Border at Calexico, Calif.

The deadline for entering to be included in the start draw within each class is Wednesday, March 15, the drawing is Thursday, March 16 and pre-running will open on the magnificent course of nearly 265 miles on Saturday, March 18. Online registration will continue until Sunday, March 26 and on-site, late registration will be held March 29, March 30 and March 31.