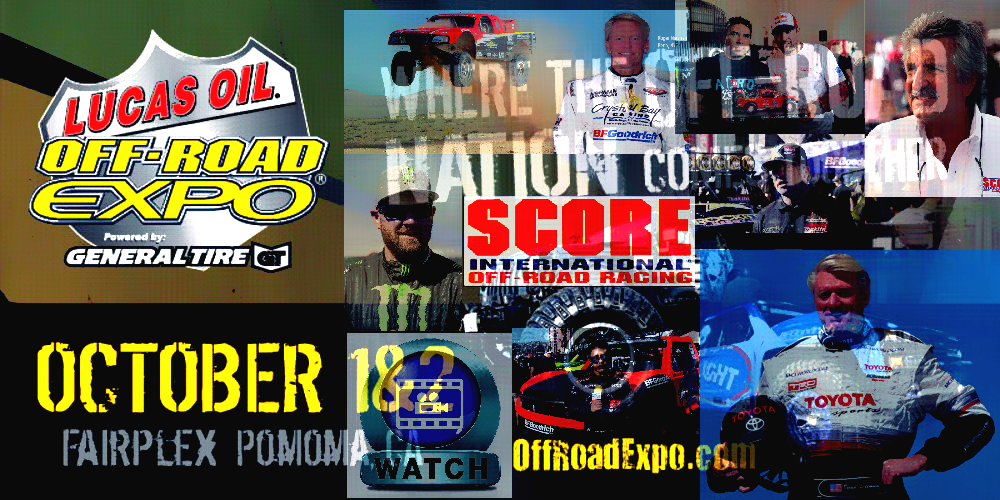 ENSENADA, Mexico—SCORE International’s SCORE World Desert Championship will continue to have a major impact at the Lucas Oil Off-Road Expo at the Fairplex, in Pomona, Calif., to be held Saturday, Oct. 1 and Sunday, Oct. 2, the extensive SCORE Baja 1000 exhibit area in Building 5 will once again offer desert-racing fans the opportunity to interact with the top desert racing teams in the world while viewing the most radical motorsports vehicles ever developed.
Nearly 250 entries, from 25 countries and 40 U.S. States are expected to compete in this year’s 49th annual SCORE Baja 1000. The race week festivities will cover Nov. 16-20, with the race and all side events starting and finishing in Ensenada, Baja California, Mexico.
In addition to showcasing current SCORE desert racing vehicles, drivers and sponsors, the SCORE Baja 1000 official course map for the race will be unveiled by SCORE officials at 3 p.m. (PT) on Saturday, Oct. 2 along with the annual class starting positions draw for all classes except SCORE Trophy Truck and Class 1, who will have their qualifying order drawn.

SCORE COMMENTS
“With the support of and assistance from the Off-Road Expo and our sponsors, SCORE is honored to present the SCORE Baja 1000 exhibit at the Expo in a such a huge way to celebrate the SCORE Baja 1000 and to continue introducing the next generation of racers and fans to the what the series is all about ,” said Roger Norman, SCORE CEO/President who is also a former champion SCORE Trophy Truck racer and SCORE Baja 1000 champion.
NIFTY 50
During the colorful weekend, SCORE will also be previewing the year-long plans and additional event details to celebrate next November’s 50th anniversary of the iconic SCORE Baja 1000 race.

MORE EXPO INFO
The 2016 Lucas Oil Off-Road Expo will once again be the largest and greatest collection of off-road companies, parts, equipment, gear, and experts assembled in America. From off-road racing to rock crawling, trail riding to sand sports, motorcycles to quads and camping to adventure travel, the event provides the unique opportunity to meet and talk with the most knowledgeable people in the off-road industry. With a full weekend of excitement, other event features include over 325 industry-specific vendors, the Lucas Oil Off-Road Racing Demo at the MAV TV Proving Grounds, Rubicon Trail – Off Road Vehicle Ride Along, O’Reilly Auto Parts Show-N-Shine, DragonFire Racing ride along, the Miss Off-Road Expo Contest and live music all weekend at the Bud Light Entertainment Stage.