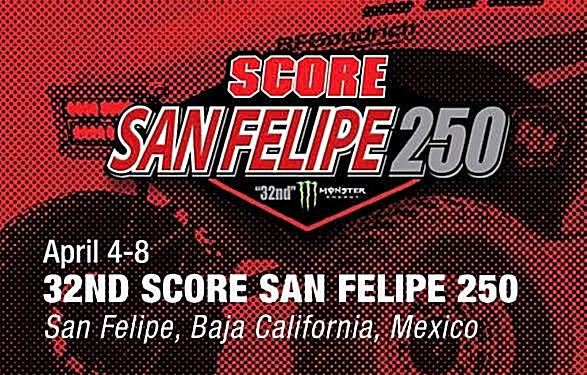 each have three entries in 32nd annual SCORE San Felipe 250

ENSENADA, Baja California, Mexico – Long admired as famous families in the sport of desert racing, the Wilson and McMillin families are at the pinnacle of the ‘Gold Standard’ portion of the foundation of SCORE Baja racing. To help launch the new season in next month’s 32nd annual SCORE San Felipe 250 in Baja California, Mexico, the McMillin and the Wilson families each have three entries in Round 1 of the four-race SCORE World Desert Championship.

Over 250 entries in Pro and Sportsman classes for cars, trucks, UTVs, motorcycles and quads are expected in the race. With many of the sport’s top stars among the first 130 official entries as of today from 21 U.S. States along with the additional countries of host Mexico, Austria, Canada, Germany, Italy and New Zealand, the McMillin family has three entries in the marquee SCORE Trophy Truck division while the Wilson family has three entries in the unlimited Class 1.

Featuring a rugged San Felipe race-record long route of 319 miles, the race will start and finish for the second straight year and just the second time in race history on the Malecon beach walk along the water’s edge in the heart of town. The event will be held April 4-8 in San Felipe, the peaceful fishing village on the Sea of Cortez, 125 miles south of the U.S. Border at Calexico, Calif.

Just like their ‘sold gold’ family friends the Wilsons, a solid Gold Standard in SCORE Baja racing has been San Diego’s McMillin family. All third generation drivers, they are racing in the long shadow cast by the late family patriarch Corky McMillin and their fathers, Scott McMillin and Mark McMillin.

Andy McMillin, 30, Scott’s son, and Mark’s sons Dan McMillin, 30, and Luke McMillin, 25, will each be racing in their own truck in the featured SCORE Trophy Truck division for high-tech, 900 horsepower, unlimited production trucks.

All three of the third-gen McMillin racers have race wins in the SCORE San Felipe 250.

Andy McMillin along with his father Scott McMillin, are two of just nine all-time winners of the SCORE Triple Crown of Baja award presented to racers who have won the overall title in the three historical SCORE Baja races—SCORE San Felipe 250, SCORE Baja 500 and SCORE Baja 1000. Andy McMillin won the overall and Class 1 race in San Felipe in 2005 while sharing the driving duties with his father Scott McMillin.

This year in San Felipe, Andy McMillin will race the new No. 31 McMillin Racing Chevy Silverado built by Mason Motorsports. It will be the first SCORE race for the truck that debuted this year by winning a domestic race in Parker, Ariz.

Brothers Ronny Wilson, 56, and Randy, 59, will split the driving time in the No. 138 Jimco-Chevy, while the oldest Wilson brother, Rick Wilson, 61, will be the team pit/logistics manager.

The three race chassis were all built by champion builder Jimco Racing of Santee, Calif. and the three Chevy engines were built by award-winning Wiks Racing Engines of Las Vegas.

The Wilson’s will debut a new Jimco-Chevy in this race with the Wilson brothers driving the No. 138 Jimco-Chevy.

The colorful pre-race contingency and Manufacturer’s Midway will be held on Friday, April 6 starting at 9 a.m., the starting line and the finish line will be on the Malecon in the heart of San Felipe for the second straight year.