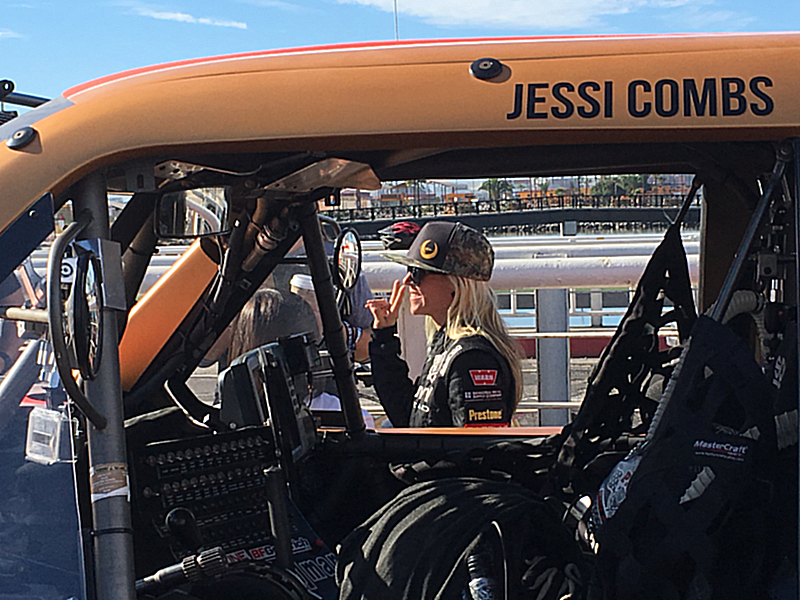 Our SCORE family joins with her family and friends from around the world to grieve over the loss of the amazing Jessi Combs, who died Monday, Aug. 27 in a tragic jet-car crash in Oregon while attempting to eclipse her own land-speed record that she set in 2013.

An accomplished professional race car driver, fabricator, spokesperson and prominent TV personality that included time on such shows as ‘Mythbusters’, ‘Overhaulin’ and ‘Xtreme 4X4’, Jessi, a native of Rapid City, South Dakota, will be forever be remembered for her friendly personality and never-ending smiles.

SCORE was fortunate to have Jessi, only 36 years old at her passing, race in four SCORE Baja 1000 races in four different classes with two podium finishes. As a co-driver, Jessi finished second in Class 10 in 2011, sixth in the Baja Challenge Class in 2012 and second in Class 7 with Paige Sohren in 2015.

For the 50th BFGoodrich Tires SCORE Baja 1000, Jessi was the driver of record in the marquee SCORE Trophy Truck. Attempting to drive solo and become the first female racer to do so in the featured class in a Peninsula run, she was unfortunately a DNF from mechanical difficulties with the truck.

We all will carry many, many memories of Jessi with us as we move forward but collectively, we will all remember with a silent toast, our very own special “Fastest Woman on Four Wheels.”

Our sincere condolences and eternal prayers go out for Jessi’s family, friends and fans.