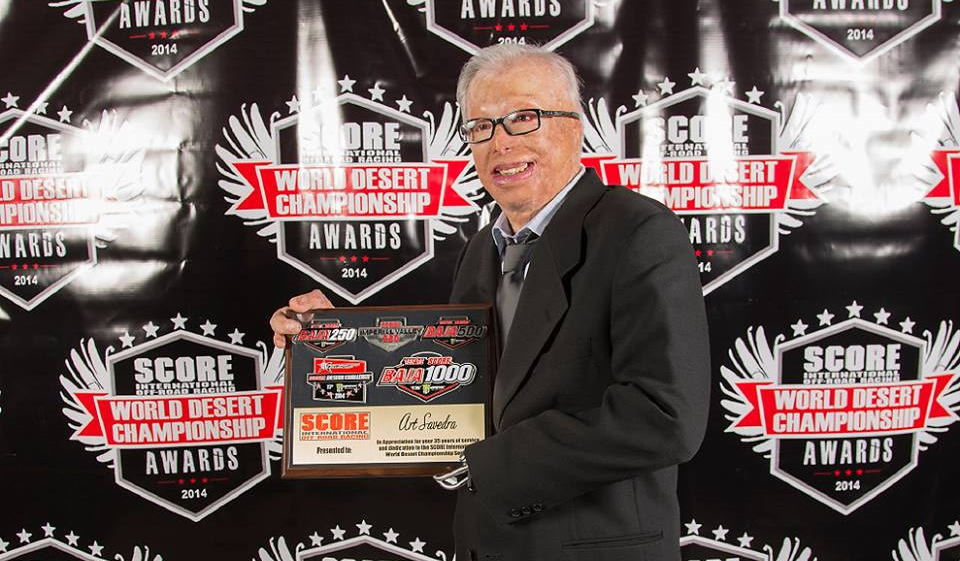 ENSENADA, Baja California, Mexico—SCORE International and its family of race volunteers are mourning the loss today of beloved, long-time SCORE Tech Director Art Savedra who passed away from a sudden heart attack Thursday night at home with his family in Las Vegas.

Savedra, a fixture in desert racing for nearly 40 years, was the owner of A.R.T.S (All Race Tech and Safety) of Las Vegas and worked with SCORE International in the tech department of its desert racing series since 1980 and held the position of SCORE Tech Director since 2012.

“Words don’t come easy at times like this and Art impacted so many of us in desert racing in multiple ways that his loss truly leaves a gaping hole in our hearts and in our sport,” commented Roger Norman, SCORE CEO/President. “One of our sport’s greatest friend passed away last night. Art volunteered himself selflessly to SCORE and many other organizations for 38 years.

“Three years ago Art became Tech Director of SCORE after being a part-time Tech volunteer for 33 years. He was co-tech director with Jake Velasco for two years and the man in charge at SCORE Tech for the last three years. I personally will never forget how many times he told me he was so very proud to be the SCORE Tech Director. We have lost our best friend.”

Born in Wilmington, Calif. on July 20, 1954, Savedra graduated from Banning High School in 1972 and also took advanced classes at Harbor College. With a deep and lasting interest in racing and race vehicles, he also took special automotive classes at Riverside International Raceway and Willow Springs Raceway.

Savedra started A.R.T.S. right out of high school and a near fatal vehicle accident that left him with third and fourth-degree burns over 85 percent of his body didn’t change his life direction. It served to make him even more passionate about not only the technical side of racing but also the all-important safety aspects of the sport and industry.

Since his accident, Savedra worked tirelessly to express the importance of safety, especially in the area that affected his life so much. Savedra had 56 surgeries to help his recovery and he spent countless hours, days, weeks and months since speaking to students and professional groups regarding fire safety. His talks with children emphasized ‘stop, drop and roll’ fire safety and to the parents he spoke strongly regarding burn care and burn prevention.

Savedra gravitated to desert racing in 1980 and through his company (A.R.T.S.) became a highly-valued friend of both racer and racing organizations as he worked with several groups up to the time of his passing.

With SCORE, Savedra had a significant role in developing both technical and safety changes in the current SCORE rule book which is the standard for the sport.

Known by many as ‘The Tech Dude’, Savedra’s many special sayings included, “Have fun, be safe and see you in the desert.”

As well-loved as he was in the desert racing community, his grandest legacy he has left behind is his loving caring family.

Although he traveled extensively in his work, he was at home with his family when he passed away on Thursday night. In addition to his countless friends and extended family, Savedra leaves behind his loving wife Suzie, his son Guy, his daughter Ivy, his daughter-in-law Lucy and his three grandchildren—Amber, Andre and Quinn.