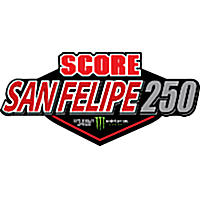 ENSENADA, Baja California, Mexico –  Recognizing that the health and safety of the racers, crews, staff and broader communities is the highest priority, and based on the concerns related to the COVID 19 (novel Coronavirus), SCORE International is modifying its race week schedule for the upcoming 34th annual SCORE San Felipe 250 in Baja California, Mexico.
Launching its 47th season as the World’s Foremost Desert Racing Organization, pre-running opens Saturday on the rugged, near race-record long 326.7-mile course for the event.
The season-opening event of the four-race internationally-televised 2020 SCORE World Desert Championship will be held March 24-29 in San Felipe, the peaceful fishing village on the Sea of Cortez, 125 miles south of the U.S. Border at Calexico, Calif.
“After consulting and evaluating the situation with Mexican authorities we are making a series of modifications to the schedule of events for our season-opening SCORE San Felipe 250,” commented Jose A. Grijalva, SCORE President/Race Director. “While certain elements are still being finalized, our goal is to minimize the exposure of racers, crews and staff with the public. We will be providing updates as needed as we begin pre-running this weekend in preparation of the following week of race activities and the race itself.”
“We also want to remind teams, crews, media and the fans the importance of following preventative measures such as washing hands regularly, avoiding direct contact with other individuals and covering your mouth when coughing,” added Grijalva. “If you feel sick or have any flu-like symptoms avoid coming to the race. We also encourage the public enjoy the race out on the course and avoid large concentrations of fans.”
Most significant changes will include moving racer and media registration as well as Race Tech Inspection to the Pavilion at El Dorado Ranch which will be closed to the public so race teams will not be required to drive through the Malecon except on race day.
SCORE Vendor’s Village on the beach-front Malecon will include vendors, the start/finish ramp and the giant SCOREvision LED screens.
Although the Awards ceremony scheduled for Sunday at the start/finish ramp has also been canceled, all race winners will be able to pick up their awards at the Pavilion at El Dorado Ranch on Sunday.
Tech Inspection of the race vehicles will be closed to the public.
SCORE also announced that the pre-race Racer’s meeting and aircraft pilot’s meetings will be held via the internet without the large crowds at the normal on-site meetings.
The elapsed-time race itself will start and finish on the Malecon on Saturday, March 28. Motorcycles and Quads will begin starting at 6:20 a.m. PT followed by the cars, trucks and utvs leaving the start line at 9:30 a.m. PT.
Although Mexico is one the countries in the world with the lowest number of confirmed cases of COVID 19 (13 as of today-March 13) and there are no confirmed cases in Baja California.
These modifications are intended to provide the best conditions possible both for racers, crews and staff as well as fans that attend the event.
SCORE is also polling the official entries in SCORE Trophy Truck, SCORE TT Legend, Class 1 and Trophy Truck Spec to determine if the teams want to go ahead and have qualifying for the race. If the drivers vote in favor of still having qualifying it will be held on Thursday morning (March 26) instead of Wednesday (March 25) as originally scheduled.
If those classes decide against having a qualifying session, they will become part of next week’s random draw for starting positions with all of the other classes in the race.
To date there are 192 race teams entered with as many as 250 total expected before the green flag drops on March 28.
For the latest, updated schedule of events go to race info tab on the official website at www.score-international.com.