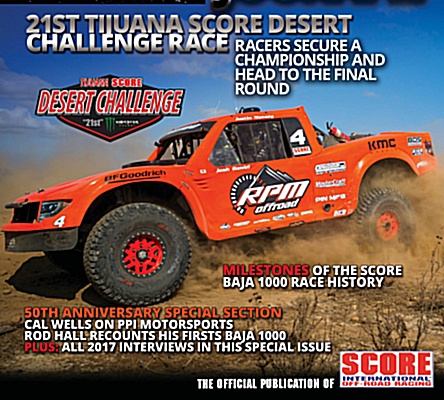 Full of interactive news and features the issue is now live on the SCORE website at www.SCOREInternational.com and is available through SCORE social media channels as well as a direct link at http://read.uberflip.com/t/183537-score-journal

With three weeks remaining before the historic 50th anniversary race of the iconic SCORE Baja 1000, several spotlight features shine brightly in the current issue but none brighter than the first preview of the adventure that continues to etch its expanding legend into granite history of motorsports. 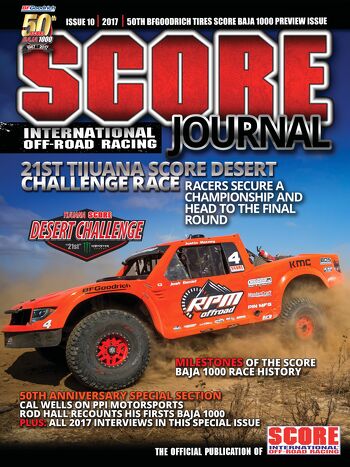 “This giant issue of the SCORE Journal showcases many important events that set the stage for the historic 50th annual BFGoodrich Tires SCORE Baja 1000” commented Jim Ryan, SCORE Marketing and Sales Director and publisher of the SCORE Journal. “Our news section highlights Baja’s great cities that celebrate SCORE’s contributions and racing heritage along with the latest info on the Dust 2 Glory premiere across the country at 7:30 p.m. (local time) on Wednesday, Dec. 6.”

Vol. 3, No. 10 of the SCORE Journal is once again filled with numerous interesting worth-reading stories, exciting videos and several news items.

Another major feature in this massive edition is a thorough review of September’s Tijuana 21st SCORE Desert Challenge, the first race in SCORE’s storied history that actually started and finished in Tijuana.   Thorough coverage includes the podium sweep in 4-wheel vehicles by RPM Racing and the second straight overall motorcycle win by the team led by rider of record Francisco Arredondo.

This issue also takes a look back at SCORE’s participation in the Sand Sports Super Show and the Off-Road Expo, two very important trade/consumer shows for the offl-road market. Both events were at maximum capacity for exhibitors and attendees as SCORE continues its reach and impact at these events with major exhibits, press conference and a Dust 2 Glory ‘sneak peak’.

Also included in this issue are all the 2017 interviews from previous issues regarding the SCORE Baja 1000 as well as a quick look at Milestones in SCORE Baja 1000 race history.