SCORE Journal Vol. 3, Issue 5 Gets You Ready for the 49th Annual Baja 500 Like Nothing Else Does

ENSENADA, Baja California, Mexico — With the 2017 SCORE World Desert Championship underway, a special preview section on this month’s 49th SCORE Baja 500 along with the continued special interview features for this year’s 50th SCORE Baja 1000 are among the highlights of this month’s Vol. 3, No. 5 of the acclaimedSCORE Journal. 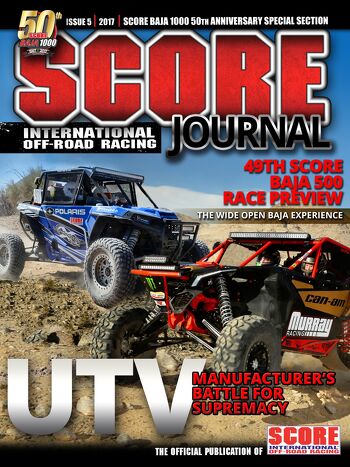 The spotlight preview features are on the 49th SCORE Baja 500 as well as a special story on the Wide Open Baja adventure tours. There are also in-depth features on eight-time motorcycle champion Steve Hengeveld and two-time SCORE Trophy Truck Champion ‘Ballistic’ B .J. Baldwin, as part of the continuing legends of the SCORE Baja 1000 series.

“SCORE continues its new season on the road to celebration of the 50th golden anniversary of the iconic SCORE Baja 1000 and this month’s SCORE Journal is another tribute to both the 2017 season and the Granddaddy of all Desert Races,” commented Jim Ryan, SCORE Marketing and Sales Director and publisher of the SCORE Journal. “Our fifth digital issue of 2017 also has a magnificent, colorful and detailed preview of the legendary 49th annual SCORE Baja 500 along with features on Steve Hengeveld and B.J. Baldwin and their love affair with the SCORE Baja 1000 are more great reads in this month’s issue as is the up close look at the factory UTV teams involved with SCORE.”

Vol. 3, No. 5 of the SCORE Journal is once again filled with numerous interesting worth-reading stories and news items.

The preview of this year’s SCORE Baja 500 includes several separate stories. One is on the challenging 515.77-mile gauntlet that is the race course and a look at the amazing racers entered in this legendary early summer race.

Another element included in the pre-race coverage of the SCORE Baja 500 is an up-close look at the Ensenada experience…the true beauty and flavors of Mexico in a unique visitor’s guide to the area.

Among the SCORE News items are info on the two SCORE specials scheduled to air on the El Rey Network, a new UTV tire developed by BFGoodrich Tires, and a recap of the 2017 Arizona Off-Road Expo. There is also a spotlight news item on the two Grand Marshals for the 49th SCORE Baja 500—legendary champion SCORE racer Ivan ‘Ironman’ Stewart and Mexican-American TV star Rey Mysterio Jr., who is considered one of the greatest professional wrestlers of all time.