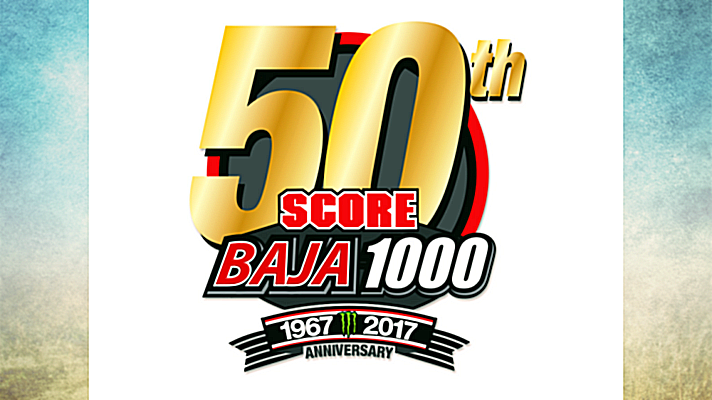 ENSENADA, Mexico.—Highlighted by the celebration of the 50th anniversary of the iconic SCORE Baja 1000, SCORE International has announced its official four-race schedule for the 2017 SCORE World Desert Championship featuring all four races in Baja, Mexico for the second time in the storied history of the internationally-televised desert racing series.
Recognized around the globe as one of the very top motorsports extravaganzas in the world and the season-finale each year of the SCORE World Desert Championship, the 2017 SCORE Baja 1000 will be a peninsula run, point-to-point race.
Being held Nov. 14-18, the race will start in Ensenada, Baja California and finish in La Paz, Baja California Sur. When finalized, the grueling race course will cover approximately 1,300 miles of the mysterious and majestic Baja California peninsula.
This will mark the 43rd time the legendary race will start in Ensenada and the 22nd time it will finish in La Paz. The grueling race itself is scheduled to start on Thursday, Nov. 16 to begin its rugged journey to the southern part of Baja.

SCORE COMMENTS
“SCORE has been building the operational and marketing assets for the past few years preparing for this historic 2017 global event and season,” said Roger Norman, CEO and President of SCORE International. “Mexican races are the cornerstone of SCORE and to have all four races South of the border is an distinct honor and a wonderful privilege. We welcome the challenge to add to the illustrious SCORE Baja racing legacy.”

THE SHOW
SCORE has also announced that final negotiations are being completed to again televise the entire SCORE World Desert Championship series nationally on the CBS Sports Network and internationally through syndication.
“With the diligence and creativity of award-winning BCII TV, SCORE has had a continuing viable domestic television package with the CBS Sports Network as our partner as well as with our expanding international syndication platform,” commented Jim Ryan, SCORE Sales and Marketing Director. “The introduction of the highly successful live-feed programming and SCORE app, social media growth and the SCORE Journal and website’s unprecedented viewer/reader growth has continued to expand the exposure for SCORE races, racers, sponsors to our global fan base.”
SCORE International will be celebrating 2017 with a four-race series that features classes for Pro and Sportsman cars, trucks, UTVs, motorcycles and quads.

2017 POINT TITLES
In order to earn a 2017 SCORE World Desert Championship class point title, SCORE has announced that all four races will be counted in the season point standings. While a minimum of three races started is required to qualify for a season point championship, one of the races that must be started is the 50th SCORE Baja 1000.

DUST2GLORY
Shot under the direction of noted Hollywood director Dana Brown during the 2015 SCORE Baja 1000 and the entire 2016 World Desert Championship, Dust2Glory.
The new film will be released in 2017 in conjunction with the 50th anniversary of the SCORE Baja 1000.

CBS SPORTS NETWORK COVERAGE
All races in the four-race 2016 SCORE World Desert Championship, along with the special SEMA SCORE Baja 1000 Experience and qualifying for the SCORE Baja 1000 from Las Vegas Motor Speedway are once again airing in the USA and Canada on the CBS Sports Network. The spectacular shows feature not only SCORE Trophy Truck coverage, but also top action and highlights from many other classes of trucks, cars, UTVs, motorcycles and quads – making sure that the most exciting footage and most compelling stories continue are part of each race event broadcast.
Capping off the 2016 broadcast season, the SCORE Baja 1000 broadcast on the CBS Sports Network will air as a full two-hour special for the second straight year.