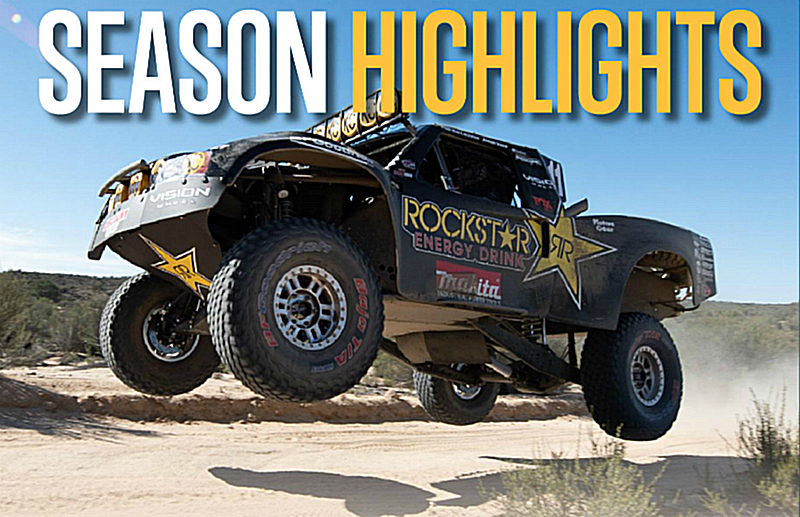 BaJa Shakes Up The Competition

Photos by Get Some Photo

The 2018 SCORE World Desert Championship season, began with some familiar faces starting at the top of various classes. One was the number 1 RPM Off-Road truck driven by Apdaly Lopez, who was the raining SCORE Trophy Truck Champion. Lopez demonstrated that driving hard, fast, and light was a winning recipe and proved it by wrapping up the 2017 season by winning the prestigious 50th SCORE Baja 1000 race overall, adding a third championship to his career.

Likewise in Class 1, Brian Wilson had finished in the top five to win a 2017 Class Championship while in Class 10, the young rookie Brock Dickerson, had a near perfect season, as did Elias Hanna in Trophy Truck Spec, both winning class championships. But Baja doesn’t like to be dominated in that fashion, so once the 2018 season began, racers were already focused on winning the next four events, especially the prestigious 50th Anniversary SCORE Baja 500 race in June. While these racers made it look easy to earn a championship season, they would soon find out that getting to the top again, would be a difficult task.

The Trophy Truck Season Belonged To MacCachren and Steele

The 2018 SCORE season began with fans expecting Lopez and the RPM Off-Road team to finish in the top five of every race and perhaps earn a fourth SCORE Trophy Truck Championship. But Lopez had mechanical problems all season long. He and the Number 1 RPM Off-Road team raced hard and gave it their all in each race, but could not muster up better than a 12th place finish at the 51st SCORE Baja 1000 in November.

For Rob MacCachren, however, the 2018 SCORE Season started off with two straight wins, one at the SCORE San Felipe 250 and another at the 50th SCORE Baja 500 race. Due to race scheduling conflicts, MacCachren was not going to race at the Lucerna Hotels & Resorts Desert Challenge, but changed his mind and had Justin B. Smith drive for a second place finish, a move that almost certainly put him ahead in season points towards a SCORE Trophy Truck Championship. At the 51st SCORE Baja 1000, MacCachren and the Rockstar Energy Team once again teamed up with Jason Voss and physically led the field of Trophy Trucks the entire race. While he ultimately finished in third place, he earned enough points to take the 2018 SCORE Trophy Truck Championship.

While MacCachren rose to the top this season, he shared the spotlight with friend and veteran racer Cameron Steele, who had one of his best SCORE Trophy Truck race seasons in 2018. To the delight of his many fans, Steele came off the 2017 season with a second place finish at the 50th SCORE Baja 1000. Knowing his Trophy Truck and team was capable of winning, he began the 2018 season by finishing second at the 2018 SCORE San Felipe 250. A disappointing SCORE Baja 500 race didn’t deter Steele and the Desert Assassins team from slowing down, and at the Lucerna Hotels & Resorts SCORE Desert Challenge, he won his first SCORE Trophy Truck race. The momentum kept going, and Steele ended the season with the biggest first-place finish of his career, winning the Trophy Truck division at the 51st SCORE Baja 1000. For these two veteran racers, their experience and determination was the winning formula for the 2018 season, demonstrating that patience and perseverance pay off in the end. For the 2019 SCORE season, MacCachren and Steele are at the top of the list of SCORE Trophy Truck racers that fans want to see back in the winner’s circle.

One of the most spectacular classes to watch during the 2018 SCORE season was the Pro Moto Unlimited division. 2017 champions, Francisco Arredondo and Shane Esposito surprised SCORE fans by winning nearly every race last year, ahead of the 1x team lead by Mark Samuels. Esposito returned in 2018 to lead the 1x team, while Justin Morgan led the 7x team with Samuels. Both teams ran neck and neck all season long but were also interrupted by the performance of the 4x team lead by Santiago Creel, who had riders such as Ray Dal Solgio, Mark Winkelman, Austin Meyers and a lot of other great riders on this team and several others.

For SCORE fans, it was like watching all the best riders at every race. Morgan and the 7x team were just too fast, utilizing one of Samuel’s old motorcycles and whatever sponsors they could muster to enter each race. Ultimately, they had a perfect season, topping it off by winning the 51st SCORE Baja 1000.

Racing against the toughest competitors on two wheels, Morgan, Samuels and Justin Jones, ran the SCORE Baja 1000 faster than the SCORE Trophy Trucks, demonstrating what elite riders can do when everything goes right. Creel and his 66x team finished the season in second place but demonstrated that their team of Mexican riders were just as capable. Finishing in the top three in all but one race this season.

Most impressive was Francisco Septien, who nearly had a perfect season, he finished second at the Lucerna Hotels & Resorts SCORE Desert Challenge but went on to win the Pro Moto Ironman Championship by running every hard and challenging mile.

Perhaps one of the only certainties in the moto classes was the fact that no-one can beat Said Sanchez in Pro Quad. Sanchez wanted a perfect season and was determined to win back-to-back championships, and nearly accomplished it. With a newly built Honda, Sanchez had some issues during the SCORE San Felipe 250 which cost him the race, but he finished in second place. After figuring out the issues, he dominated the remaining three races, winning another Pro Quad Championship and dominating the class.

Teams in the various open-wheel classes struggled all season, winning one race then posting a DNF for another. Within the Class 1 teams, the season went back and forth between the 153 car of Brad Wilson, Brandon Bailey in the number 129 car, and Justin Davis in the number 185 car. At the start of the season, it looked like there was no stopping Justin Davis, who won the season opener in San Felipe, and again at the 50th SCORE Baja 500. Then he posted a DNF at the Lucerna Hotels & Resorts SCORE Desert Challenge and at the 51st SCORE Baja 1000 with mechanical problems that ended his winning streak.

Wilson finished in the top three at all four races with a first-place finish at the Lucerna Hotels & Resorts SCORE Desert Challenge, which was just enough to give him the points necessary for a Class 1 championship. Brandon Bailey finished the season with a best of third place at the 51st SCORE Baja 1000, beating Wilson who came in third but missed winning the championship by only 26 points.

In another heated competition, it was assumed that the 2017 Champion Broc Dickerson, would once again dominate the class. But as it turned out, the championship was all about finishing. Dickerson won the SCORE Baja 500 and the Lucerna Hotels & Resorts SCORE Desert Challenge, but a 13th finish in San Felipe and a DNF at the 51st SCORE Baja 1000, left the door open for the 1081 team of Todd and son Matt Winslow for a possible chance at a class championship. The Winslow’s finished in the top five at each race with a best second place finish at the Lucerna Hotels & Resorts SCORE Desert Challenge. Because other teams didn’t compete in every race this season, the race for the championship was a nail-biting experience. Todd and Matt Winslow waited patiently at the finish line of the SCORE Baja 1000 knowing that if Dickerson finished with a better time, he would win the class championship. Ultimately, Dickerson broke down and the Winslows walked away winning the Class 10 Championship, as well as earning enough points to take the Overall Open Wheel Championship too.

The Matlock’s Battle To The Finish

As the horsepower and suspension systems improved for UTV’s this past season, new and veteran racers had to be at the top of their game for a chance to win a race. Last year, Kristen Matlock proved that horsepower didn’t matter, winning the Overall UTV Championship, and driving every mile solo. She would continue this into the 2018 season with her husband Wayne Matlock, re-energized by her success. At the start of the season, some of Kristen’s magic rubbed off on Wayne, as the both of them won their respective classes, Wayne winning the Pro UTV FI in San Felipe, and Kristen winning the Pro UTV NA class the same race.

The duo continued to be at the top of the UTV divisions, with Kristen winning her class, and overall in the UTV category, at the 50th SCORE Baja 500. Wayne finished in second place behind a tough Brandon Sims, who won the only SCORE race he entered this season. It wasn’t until the Lucerna Hotels & Resorts SCORE Desert Challenge that Baja threw a wrench in the Matlock’s party. Kristen DNF’d with vehicle problems but Wayne finished second behind Rhys Millen.

At the final race of the season, the 51st SCORE Baja 1000, Wayne Matlock only needed to finish in the top three to win a championship. Kristen needed a win for a chance at one, but again had mechanical issues that ended her season with only two of four victories and not enough points to win the Pro UTV NA championship. That title went to Kade Wells who finished in the top three all season, with a best first place finish at the SCORE Baja 500.

For Wayne Matlock, he successfully finished first at the SCORE Baja 1000 and secured the Pro UTV FI and Pro UTV Overall Championship in the process. By finishing in the top two at every race, and completing every mile, Matlock also earned the most points out of any other racer during the 2018 SCORE Season, becoming the first ever UTV racer to win the SCORE Overall Season Points Championship.

Although the highlights of this season were exciting to witness and hear, each racer who competed during the four races of the 2018 SCORE World Desert Championship Season, the SCORE San Felipe 250, 50th SCORE Baja 500, Lucerna Hotels & Resorts SCORE Desert Challenge, and the 51st SCORE Baja 1000, each had their own stories to tell of triumph, misfortune, camaraderie, and accomplishment. SJ