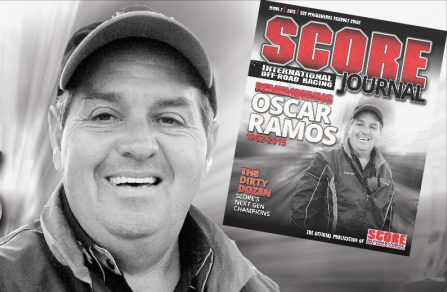 available for viewing at SCORE-International.com Featuring in depth coverage of SCORE,

and the entire off-road industry.

RENO, Nev., USA — Continuing its awesome ascent as a significant, superlative dynamic digital force with hundreds of thousands of unique viewers of each edition, Issue No. 7 of the SCORE Journal, the new monthly on-line digital magazine of SCORE International and the five-race SCORE World Desert Championship, is now live on the SCORE website at www.SCORE-International.com and is available through SCORE social media channels as well as a direct link at http://scorejournal.digital.

The digital magazine in its first year includes numerous linked video segments is a major element in the media expansion that SCORE is implementing for 2015 which includes its most aggressive national and international television packages, four new online video series, each with 26 episodes and a new consumer based SCORE website.

“In issue No. 7 of the SCORE Journal we pause to celebrate the life of SCORE’s Mexican liaison, Oscar Ramos J., who passed away recently while undergoing treatment for esophageal cancer,” commented Jim Ryan, SCORE Marketing and Sales Director. “Oscar was an enormous positive influence on the development of SCORE International for the past 20 years and he was a dear friend to all of the SCORE community.”

Ryan added, “SCORE International continues to make headlines not only with the global race brands we operate, the on-site experiences, media assets and race team and sponsor exposure at both race levels and industry events like SEMA, but now we must recognize the best fans in all motorsports! The unique views of the SCORE Journal are unprecedented and the average engagement time continues to be over 60 minutes.”

Highlighted with the memorial feature on Oscar Ramos, Issue No. 7 of the SCORE Journal is 102 pages with more than 10 video links and also includes a preview of next month’s Rigid Industries SCORE Imperial Valley 250 presented by the City of El Centro, SCORE news flashes, and the off-road marketplace.

There are also features on the Fortin Racing family and an eight-page feature spread on the SCORE Dirty Dozen young guns of the 2015 SCORE World Desert Championship. Additionally this issue includes detailed stories with SCORE 101 focusing on the ever-growing Class 19 for stock UTVs along with a feature on the Jackson Motorsports Group and a look at Rod Hall’s champion 1969 Stroppe Ford Bronco.

The SCORE Journal will publish eleven (11) monthly online digital magazines, which will include five print editions that will be available as the SCORE race programs at the five events that comprise the SCORE World Desert Championship, will make up the 2015 SCORE Journal release schedule.

All races in the 2015 SCORE World Desert Championship series, along with the special SEMA SCORE Baja 1000 Experience and qualifying for the Bud Light SCORE Baja 1000 from Las Vegas Motor Speedway, will once again be aired in the USA and Canada on the CBS Sports Network.  New for 2015, in addition to SCORE Trophy Truck coverage, the shows will also feature top action and highlights from many other classes of trucks, buggies, motorcycles, quads and UTVs – making sure that the most exciting footage and most compelling stories are now part of each race event broadcast.

SCORE-Interational.com now offers the global fan base access to exclusive content representing all that is happening with SCORE International along with team, driver, sponsor updates, plus the products and technology that drive the world’s foremost desert racing organization.  The new website launched the week of June 8 of this year.

CHECK IT OUT NOW!
SCOREJournal.digital No. 7 - TOC