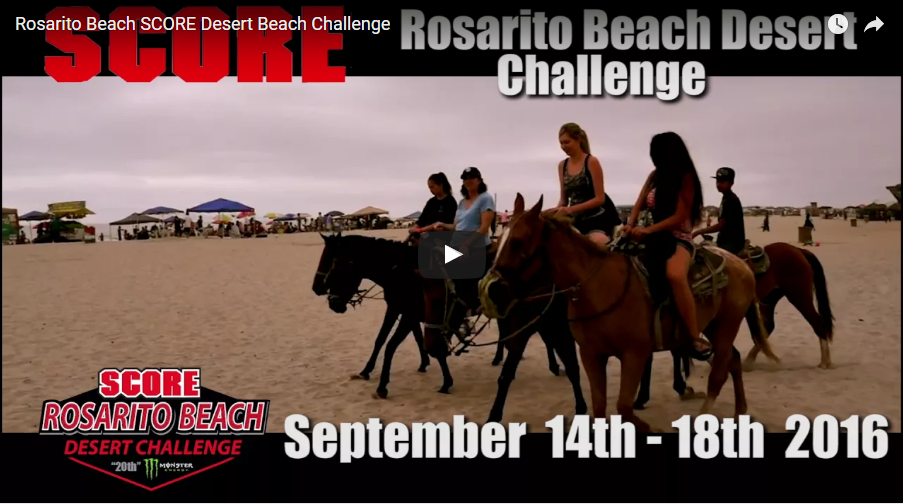 ROSARITO BEACH, Mexico—With less than two weeks before the start of something spectacularly new for SCORE desert racers, this week’s pre-race schedule includes the drawing for starting positions within each class as well as pre-running on both days this weekend.
Next week’s internationally-televised Rosarito Beach 20th SCORE Desert Challenge, Round 3 of the four-race 2016 SCORE World Desert Championship, will be held next Thursday to Sunday (Sept. 15-18) in Mexico’s Baja California. Starting and finishing just south of Rosarito Beach, the colorful resort area on the Pacific Ocean located just 19 miles from the U.S. Border south of San Diego, it marks the first time in its storied history that SCORE International has held a race in the Rosarito Beach area.
With competition in classes for cars, trucks, UTVs, motorcycles and quads, the start draw will be held Thursday and the only two days of pre-running for all classes will be on Saturday and Sunday from 8 a.m. to 5 p.m. PT each day. An additional practice session will be held for motorcycle and quad classes only prior to the start of their race on Sunday, Sept. 18 from 6:30 a.m. to 8:30 a.m. PT

START DRAW DEADLINE
Nearly 150 total entries are expected at the start line with entries from 15 U.S. States and five countries anticipated. The deadline to enter the race in order to be included in the drawing for starting positions is Wednesday, Sept. 7. The drawing, to determine the start order within each class, will be held on Thursday, Sept. 8. Because of the nature of the event and location, there will be no qualifying for any classes, giving even more importance to the start draw.
Official entries received after the drawing will be given the next available starting position within their respective classes. Online entries will be accepted until 10 p.m. PT on Sunday, Sept. 11. Late entries after that date must all be completed at registration in Rosarito Beach.

PRE-RUNNING
Official practice, or pre-running, on the official race course will be held only for official entries with fully-paid entry fees. The pre-running will be held this Saturday and Sunday (Sept. 10-11) from 8 a.m. to 5 p.m. PT each of those two days. An additional special pre-running session will be held just for motorcycles and quads entered in the race from 6:30 a.m. to 8:30 a.m. PT on Sunday (Sept. 18) prior to their race.
Food and beverage vendors will be open adjacent to the start/finish line area during pre-running this Saturday and Sunday and on Sunday, Sept. 18 during the special additional pre-run session for motorcycles and quads.
ENTRY FEES LOWEST IN 20 YEARS
Online registration, by class, for Pro and Sportsman cars, trucks, UTVs, motorcycles and quads, is ongoing through the SCORE website. SCORE has announced that entry fees for this year’s race have been reduced to the lowest amount in 20 years. The SCORE website has information on all SCORE races which can be found on the home page under the Race Info tab.
For more info, visit http://score-international.com/raceinfo/rosarito-desert-challenge/

BIENVENIDOS A PLAYAS DE ROSARITO
Race headquarters will be the iconic Rosarito Beach Hotel, the historical landmark in the heart of Rosarito that opened in 1925. The SCORE World Desert Championship will be visiting the popular Playas de Rosarito for the first time in its long and storied history.
Located 19 miles south of the border near San Diego, this scenic location between the alluring beaches of the Pacific Ocean and majestic coastal foothills of Baja California Norte helps to make Rosarito one of the leading resort towns in all of Mexico.
The main urban district of Rosarito Beach is a four mile stretch along the beach on Blvd. Benito Juarez that is filled with hotels, condominiums, restaurants, night clubs and gift shops.

A HAPPENING…
Colorful race week festivities will start next Thursday (Sept. 15) with the day-long, pre-race Manufacturer’s Midway and Contingency festival starting on Blvd. Benito Juarez and will travel along the beach in front of the massive famed Papas & Beer Beach Club and finishing back on Blvd. Benito Juarez almost in front of the legendary Rosarito Beach Hotel. SCOREvision will stream contingency activities and racer interviews from the beach in front of Papas & Beer.
The Monster Energy SCORE Kick-off Party will be held from 7 p.m. to 11 p.m. PT next Thursday (Sept. 15) in the Monster Energy VIP area at Papas & Beer.
After staging at Papas & Beer, the three groups each day will parade with a police and SCORE escort to the start line 9.5 miles south of town.
At 8:30 p.m. PT next Saturday (Sept. 17) at Papas & Beer, the awards celebration will be held for the car/truck/UTV classes and at 6 p.m. PT next Sunday (Sept. 18) for the motorcycle/quad classes.
All of the week’s festivities will air live, including the three race days, via the internet on the SCORE website and the new SCORE App.

SPECIAL FORMAT
Unique for SCORE, the race format will have all classes racing a total of four laps over a surprisingly rugged 32.8-mile race course (131.2 total miles) split into two, two-lap sessions.
For cars, trucks and UTVs, they will be divided into four groups, running their first two laps next Friday (Sept. 16) and their final two laps next Saturday (Sept. 17).
The motorcycle and quad classes will run as one large group, running all of their laps on Sunday (Sept. 18), their first two in the morning and the final two in the afternoon following a break.
It is an elapsed-time race with vehicles in each group starting in 30-second intervals.
Racing for the cars, trucks and UTVs will start at 6:20 a.m. PT next Friday (Sept. 16) and Saturday (Sept. 17) and the course will close each day at 6 p.m. PT. The featured SCORE Trophy Truck division for high-tech, 850-horsepower unlimited production trucks will start their laps along with the Trophy Truck spec class each day at 12:40 p.m. PT.
Next Sunday (Sept. 18), motorcycles and quads will start their first two laps at 10:30 a.m. PT and their final two laps starting at 2 p.m. PT with their course closing at 3:55 p.m.
The start order for the second session will be an invert of the start order from the first session.

HISTORIC COURSE
The race features a colorful course, finalized by SCORE CEO/President Roger Norman along with Race Director Jose A. Grijalva of 32.8 miles through the foothills and around a mountain to the south and east of central Rosarito Beach. It was start and finish a the Los Manantiales area.
This landmark race course is another memorable example of Baja California diversity in terrain starting near sea-level and climbing up twice to around 2,000 feet. The course will be another unique jewel reflecting the majestic beauty of Baja California going through more ranches than most SCORE race courses.
Traveling in a clockwise direction, the race course weaves its way through washes, on existing trails, up and over a ridgeline trail at the top of two hills and back down into the start/finish line area off of the old Highway 1 south of Rosarito Beach at Los Manantiales.
Filled with farms and ranches, the race course goes through areas like Piedra Azul, Panchos, Loma Del Gato and Loma Bonita while racing around the famous El Cerro del Coronel mountain in areas where SCORE has never before held a race.
The race course will include three physical, full-stop checkpoints, checkpoint No. 1 at race-mile 9.7, CP No. 2 at race-mile 18.9 and CP No. 3 at race-mile 27.1.

SPECTATORS
Local organizations sponsoring and supporting the Rosarito Beach 20th SCORE Desert Challenge are developing a unique and slightly-elevated spectator area at Los Manantiales with line-of-sight viewing of the start line, finish line, hot pits and first and last portions of the race course. The spectator area will also include food and beverage stands and novelty vendors. The spectator area will also have its own access road with ample directional signage to the area.
The rest of the course will include limited access to spectators in specific locations that will be under police supervision as much of the challenging course winds through several private ranches in the area that are entirely fenced in.

HISTRIONICS
While this will be the first time in Rosarito Beach, the SCORE Desert Challenge has been held 19 previous times since it first began in 1995. It was held in Laughlin, Nev., USA, from 1995 through 2012 and in Plaster City, Calif., USA, in 2014.