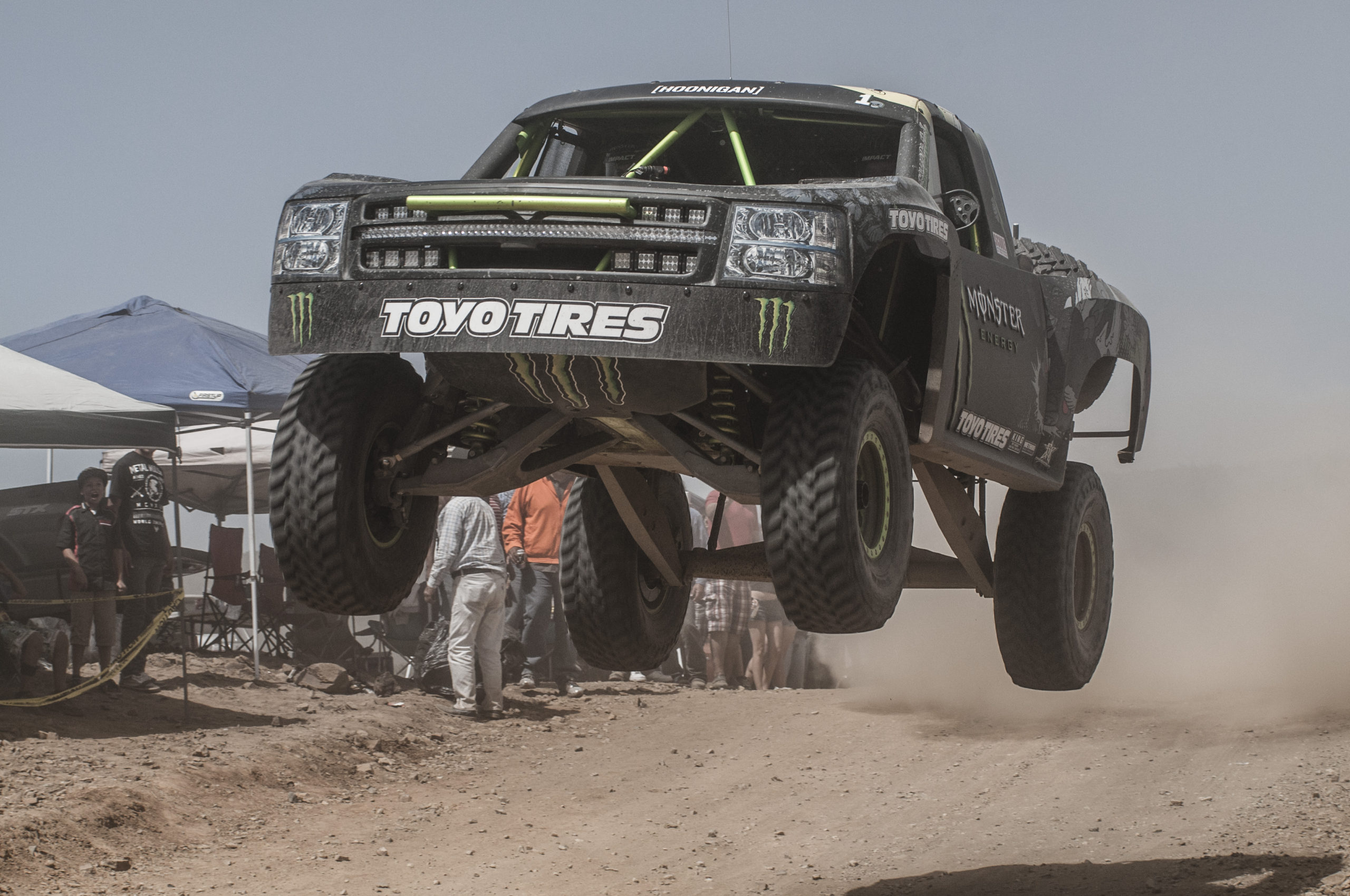 One of the most synonymous names associated with off-road racing is BJ Baldwin, a

the sport that can’t help but be recognized. While many racers attribute their love for

desert racing from exposure to it from their fathers or other relatives, Baldwin’s first

that I introduced my father to off-road racing,” says Baldwin. “My sister Staci let me

borrow some money when I was 17 years old to buy a buggy. My Dad and I started

racing the buggy and he didn’t start driving an off-road car until several years later. He

and irreplaceable asset since then.”

At that time, BJ Baldwin was driving in Class 10, and when Baldwin Motorsports began,

he moved up to a Class 1 vehicle. Shortly thereafter, both were driving in the SCORE

2007 only to crash in the last four miles of the race, and lose to one my mentors Larry

Ragland,” says Baldwin. “We ended up finishing third, but the most fun part of that race

was racing with Larry Ragland for 200 miles.”

performance, remaining on top of a race circuit like SCORE can take their toll on any

driver and team. ” I have been racing SCORE Unlimited Trophy Truck since 2003 and

as long as I can remember, it has been very hard to win races,” says Baldwin. “I

compete in a series in which I believe contains the most talented drivers in the world.

Off-road racing isn’t like NASCAR, Rally or INDY Car. It has far more complexities as it

relates to driving than any other form of racing. We never see the same corner twice or

the same jump twice and we are constantly unsure of what’s ahead. This form of

motorsport is far more exciting than any other form of motorsport on the planet.”

he enters, Baldwin has learned that social media, videos, and sponsorship promotions

are key for modern racers to be successful. ” It’s hard enough to increase your

popularity in a sport that is not nearly as visible as other forms of motorsports. Several

years ago, my social media following had become much greater than that of the entire

off-road racing community,” said Baldwin. “The guy that is picking up his kids in a

“Through my social media platforms, I have the largest communication outlet, which is

much larger than all of my fellow competitors combined. With that comes a certain level

of responsibility and to a certain extent, when I speak, I speak for the entire off-road

Having such a large following can also have its drawbacks and responsibilities. Baldwin

every turn and obstacle on the race course. “There are certain times when I want to use

that platform to cut through the BS and say something that needs to be said,” says

Baldwin. “But I don’t have the luxury of being able to say anything I want to say

anymore. I have to constantly be aware of how my words might be interpreted by a very

wide and diversified audience. Having a large following in a sport that is so fragile

determined to misinterpret me. I think it’s important to portray our sport and our lifestyle

in an entertaining fashion to increase the public’s interest in this form of motorsports.”

“As it relates to tying that in with my sponsorship commitments, as much as I’d like to

win every event I compete in, I obviously don’t. It is my job to create value in my social

media presence regardless of my competitive performance,” says Baldwin. “Off-road

difficulties that prevent us from doing as well as we would like to. Trying to get a

environments is what makes this sport so amazing, yet so hard to compete in.”

It’s obvious that over the years, Baldwin has matured as a racer and advocate for the

sport. He has often been outspoken about his crew and supporters in the background

whom he recognizes are vital to the overall success of the team. “Only a person of

victory or defeat in such a complex activity such as running a motorsports program,”

says Baldwin. “There are 25,000 parts on the truck and if any one of them is not

assembled to perfection it can cost you a race, a championship or even sacrifice your

own safety. The team is everything, and having the most intelligent people in the

business is the best way to align yourself with a successful season.”

In 2014, Baldwin brought aboard Willie Valdez Jr. as co-driver, who replaced Johnny

Nelson who was suffering from a back injury. Valdez Jr. has a long history in off-road

racing, working with teams such as the Rough Riders, Herzog Motorsports, Vildósola

Racing, Volkswagen Racing and Menzies Motorsports. ” Willie is classified as a CDMF.

This means if there’s something that has to be done, he will find a way to get it done,”

says Baldwin. “He is the keystone of our operation and one of the most intelligent and

superiorly experienced people in all of off-road racing. We are very lucky to have him.”

and off the race course, he is still quick to do whatever it takes to win and lives up to his

nickname “Ballistic BJ Baldwin.” The term was a silly, quick name that Baldwin made up

himself but never thought it would stay with him. “In 2003, there was a Trophy Truck

driver by the name of Alan Pfluger. Alan was a friend of mine and I used to make fun of

the fact that they called him the “Flyin’ Hawaiian.” So I created the name “Ballistic” to

make fun of his silly superhero name and unfortunately it stuck,” says Baldwin. “The

follow the sport. I feel blessed that I made the mistake that led more young fans to

follow me which has increased my popularity. It has given me some power in guiding

win at the San Felipe 250. While he’s remained in the top ten of the Unlimited Trophy

Truck pack throughout the year, he and the Baldwin Motorsports team looks forward to