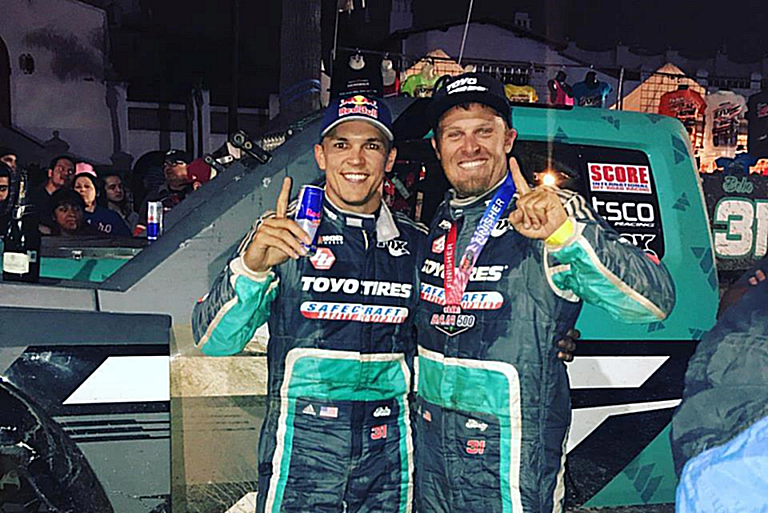 ENSENADA, Baja California, Mexico—Five decades of milestones are recognized in a tantalizing timeline history developed for the SCORE Baja 500, Round 2 of the four-race 2018 SCORE World Desert Championship when it is held May 29-June 3.

One of the world’s top motorsports events will be celebrated in a special way this year at the upcoming internationally-televised 50th BFGoodrich Tires SCORE Baja 500. The celebratory race will  start and finish in Ensenada, Baja California, Mexico, the seaside port on the Pacific Ocean, 80 miles south of San Diego.

Early entries have come from 19 States in the U.S.A. along with host country Mexico, Argentina, Canada, Italy and New Zealand.

Echoes of the legendary SCORE Baja 500

-Because of litigation regarding the name, SCORE calls the race SCORE Baja Internacional for the next 16 years

-Mitch Mayes/A.C. Bakken are the overall 2-wheel winners on a Husqvarna motorcycle

-Larry Roeseler/Bruce Ogilvie team to win the overall 2-wheel on a Harley-Davidson. It was Roeseler’s first of a race-record nine overall motorcycle victories in this race

-Larry Roeseler teams with A.C. Bakken to win the overall 2-wheel on a Husqvarna

-A then race-record 384 vehicles start the race. Record would last for 22 years

Funco-VW. Smith would win four overalls include one on a motorcycle (1971) and Feldkamp would win three overalls, two with Smith

1984- Because of a continuing dispute between landowners and the government, Sal Fish moves the

race for the only time in its history outside of Mexico to the U.S.A. desert near Barstow, Calif.

Chenowth-Porsche. It was Mark’s first of three solo drives to the overall as the others came in 1997 and in 2001. It was also the second of five overalls in race history for Porsche-powered vehicles

1989- Because of internal disputes again in Mexico, Sal Fish moves the race to San Felipe and for

has legally registered for perpetuity as the SCORE Baja 500, the name it was always called by racers and fans

-Ivan Stewart wins the first SCORE Trophy Truck title at the SCORE Baja 500 becoming the only 4-wheel racer to win four consecutive years, all in a PPI Toyota truck

-Starting with this race, Honda won the motorcycle portion for the next 16 consecutive years

series, the second of three straight wins for the Ironman

2000 – Team of Jonah Street/Steve Hengeveld win motorcycle overall; the first of seven for

Hengeveld and the second of three for Street

2008 – B.J. Baldwin in a Chevy truck edges Rob MacCachren by just seven seconds in the closest overall finish in the history of the SCORE Baja 500

2010 – Andy McMillin becomes the fourth McMillin to win the overall, teaming with his father Scott in a Ford

2012 – Robby Bell/David Pearson/Steve Hengeveld win the 2-wheel overall on a Kawasaki, breaking the 16-year win streak by Honda in motorcycle competition in this race

-Robby Gordon wins his fourth overall in a Chevy truck

to win the overall in the SCORE Baja 500