Forty years of testing and development in Baja says something about a tire company, especially one that has a history of the most race wins and championships in SCORE International desert racing.

Within that time, BFGoodrich has accumulated 27 overall wins at the SCORE Baja 1000, and 86 total wins on the Baja peninsula.

Over the years, BFGoodrich’s relationship and history with SCORE International have been much more than a means to test tires. The company’s engineers, marketing team, and many employees have helped hundreds of people become addicted to desert racing, resulting in the development of numerous SCORE champions along the way.

The close relationship between SCORE and BFGoodrich began at a time when Baja racing was attracting serious competitors who were building faster vehicles with more capable suspension systems. In 1975, at the suggestion of then SCORE owner Sal Fish, BFGoodrich engineers first set foot on the Mexican Baja Penninsula to see if this race venue would make for good testing grounds. “At that point, we were developing the BFGoodrich Radial All-Terrain T/A when we got hooked up with Sal who invited us to Baja,” said Dan Newsome, who started with BFG in 1978 and is now the Marketing Manager at Michelin Tire. “We learned a lot from the experience so we went back to do more development. A year later in 1976, BFGoodrich had its first entry at the SCORE Baja 1000 with Fritz Kroyer in a Class 6 Oldsmobile Starfire. Although the company’s first entry into the SCORE Baja 1000 resulted in a DNF, it sparked an enthusiasm within the company, creating the goal of winning the 1000, one they needed to achieve.

At that time, only bias-ply tires were suited for off-road racing and were widely used by teams. According to Frank DeAngelo, who started with BFGoodrich 38 years ago, and is now the Executive Director, Motorsports at Jackson Motorsports Group, BFGoodrich was the first to try a Department Of Transportation, D.O.T., approved radial tire in off-road racing. “After that initial SCORE entry in 1976, the company did more testing with the help of Frank “Scoop” Vessels and his team,” said DeAngelo. “The original tire was two-ply, and the company found out that it was not strong enough. So they developed a three-ply tire. It was a lot stronger, and in 1977, Vessels went racing on it.” During the same year, at the SCORE Baja 500, Ivan Stewart, won his class in a Chenoweth buggy equipped with Radial All-Terrain T/A tires. BFGoodrich tires continued with two more victories the following year, winning the 1978 SCORE Baja 500 and SCORE Baja 1000 in Class 8.

The launch of a radial off-road tire was big news at the time, as radial tires were thought of as “street” tires, not suitable for any racing application. “The BFGoodrich Radial All-Terrain T/A was the industry’s first off-road recreational tire,” said Chris Baker, Motorsports Director at BFGoodrich Tire. “Most will tell you that this single product created a general type of tire within the tire business. But it was intentionally focused on off-roading. It was with the involvement in desert racing with SCORE from that time in the mid-seventies, that became the mechanism through which BFGoodrich learned about soft soil mobility, endurance, and off-road traction in general. After 40-plus years, we’ve gotten a lot better at it.”

Despite the wins by Vessels, Stewart, and other racers, it was a slow process to get teams to try racing on radial tires. In fact, according to Newsome, it was a difficult just to get Vessels to sign off on using the tires in the first place. “It was a very slow process,” said Newsome. “Initially, it was a challenge to get Scoop into trying these tires. When he did finally say okay, he bought off on it. As he began to win, he partnered with Bobby Gordon which helped get more teams to notice.” With Vessels and Gordon entering a variety of races, other teams had begun realizing that the BFGoodrich Radial All-Terrain T/A was holding up to serious punishment.

With more development going into making the tires successful, BFGoodrich developed and successfully launched its Radial Mud-Terrain T/A in 1980, offering a more aggressive tire for racers and off-road enthusiasts. “The Radial Mud-Terrain T/A was also D.O.T. approved, and was very successful,” said DeAngelo. “Racers now had the option to race on all-terrain or mud-terrain tires.”  At this time, several teams had already begun running SCORE races on BFGoodrich tires. This resulted in the company’s first overall win in 1981, at the SCORE Baja 500, with Malcolm Smith and Bill Newbury. This lead a several teams wanting to use the tire from that point forward. “By 1982, we had four to five good-sized teams running on our tires, including Ivan Stewart, Bill Stroppe, Rod Hall, Don Adams, Malcolm Smith, and Johnny Johnson to name a few,” said Newsome. Desert Racing Was In The Pits

Although several teams were now running on BFGoodrich tires, there was yet another element to the company’s involvement and success in SCORE that occurred in 1982. The company’s Pit Program was developed out of a necessity to keep track of teams utilizing the company’s tires. But it also became important to many SCORE racers, who at the time couldn’t afford to run their own pit crew. “Bob Bower was the new manager of BFGoodrich’s off-road program in 1982,” said Newsome. “He started the annual task of tracking teams and soon realized that with the size of the budget he was given, it was very overwhelming. He felt that the best way to accomplish all this, and to offset the expenses involved, was to help the racers by providing pit support.”

Bower’s first recruit was Frank DeAngelo, who at the time was the driver of BFGoodrich’s tractor trailer. “We came up with the idea and thought we should start pitting with the tractor trailer,” said DeAngelo. “To make the program work in the beginning, we pulled people together from BFGoodrich, as well as other teams.”

Bower and DeAngelo were able to get two people from each of their sponsored race teams in a number of pits along the routes of SCORE races. The two began establishing a network of pit support using anything and anyone they could get. “At one point, we had a truck from racer Don Adams, Scoop Vessel’s trailer and a bunch of other vehicles all hobbled together,” said Newsome. “By the end of the year, it had grown to be something that really worked. It was driven by a business need, but it created something for BFGoodrich internally that we never forgot. We made a lot of teams happy. We quickly realized that If you can enable people to do what they really love to do, your circle of friends gets big really quick.”

DeAngelo moved from driving the tractor trailer to managing the pit program in 1983. “Some of our top teams joined the program and helped us put together a network of pits every 100 miles along the course,” said DeAngelo. “Later on, Dan Newsome took over the pit program, but by that time, some of those original teams that helped out thought the pits were becoming more competitive. So we began contracting other groups to provide pits for us. We ended up contracting with organizations like Spirit Racing to help us out, but we also had lots of people who wanted to volunteer. The program grew to the point where we had lots of trucks, trailers and teams, including Gary Johnson, father of NASCAR driver Jimmy Johnson. We eventually had to move away from teams participating and gathered people who were more specialized in pitting so that it could be done quickly, efficiently, safely, and without any bias. To this day, BFGoodrich continues to use two or three of its own trailers and have three pit-teams that we contract with, to run a pit for us. We plan about 20 people in the pits, welders, fabricators tire changers, mechanics, cooks, medics, and even bi-lingual workers to manage communications. What’s amazing is that 90 percent of all those people are volunteers. They take their vacations to come down and support the pit program, and many have been doing this for 15 to 25 years!”

Needless to say, the pit program was very successful not only for racers but for BFGoodrich as well, as the only requirement to utilize them was to run the company’s tires. Over the years, many racers, teams, and champions have utilized BFGoodrich’s Pit Program, including now SCORE International owner Roger Norman, who won the overall SCORE Baja 1000 in 2008. “My first involvement with the BFG pit program was with my Class 12 car in 1996,”said Norman. “I purchased BFG tires and got free pit service. My wife Elise was driving a truck with a trailer, and only had a few parts, not even any spares for the vehicle.”

For those racers who were first getting involved with SCORE, utilization of the BFGoodrich pits was a great way for them to stay in competition. “The development of the BFGoodrich Pit Program was key for SCORE and many teams,” said Norman. “When you’re starting out in desert racing, you don’t know what you’re doing. BFG’s pit program to this day makes it easy and affordable.” – – (SEE SCORE JOURNAL for the rest of TOUGH COMPANY) 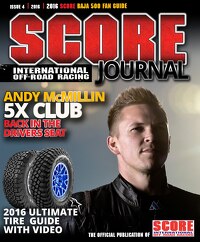