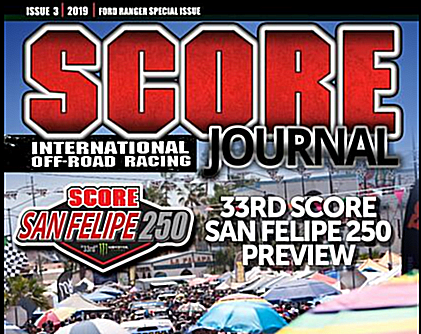 ENSENADA, Baja California, Mexico — Coverage in text, images and video previewing next week’s season-opening 33rd SCORE San Felipe 250 along with several breakout pieces on the legendary, re-launched Ford Ranger are bathed in the spotlight this month in Vol. 5, No. 3 of the highly-acclaimed SCORE Journal digital online magazine. 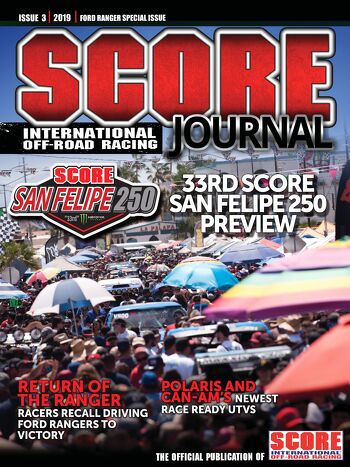 Full of interactive news and feature stories, the issue is now live on the SCORE website atwww.SCOREInternational.com and is available through SCORE social media channels as well as a direct link athttp://read.uberflip.com/t/183537-score-journal.

In addition to the preview section of the season-opener of the four-race 2019 SCORE World Desert Championship, there is a large special section covering the re-launch of the iconic Ford Ranger, including some of its SCORE history. The issue also has several SCORE News items, lots of new products and a pair of very special features on two of the newest UTVs on the market.

“Our March SCORE Journal takes a look at the launch of the 2019 SCORE World Desert Championship in San Felipe including the official race schedule that includes two days of contingency for the first time in SCORE history at this race,” commented Jim Ryan, SCORE Marketing and Sales Director and publisher of the SCORE Journal. “This issue also features an in-depth look into return of the popular Ford Ranger through the eyes of several people including racers who drove it to victory lane back in the day and who still champion it today..”

“We also remember Pete Sohren, a very colorful part of our SCORE Family of racers, who passed away earlier this year and who will be remembered in a special way at this race by SCORE and SCORE Trophy Truck racer Cameron Steele.”

This SCORE Journal also puts the microscope to the iconic Ford Ranger, its history overall, its history in SCORE racing, some of the drivers and people who lived the early Ranger experiences including the launch of the next generation of the Ford Ranger.

The issue also includes a special look at two of the latest new models of UTVs on the market—the 2019 Polaris RZR P Turbo S Velocity and the 2019 Can-Am Maverick Sport DPS 1000R.