ENSENADA, Baja California, Mexico — A dual spotlight shines brightly on the annual SCORE Off-Road Wheel Guide and a preview of the postponed 34th SCORE San Felipe 250 in this month’s Vol. 6, No. 3 of the critically-acclaimed SCORE Journal digital online magazine that is now available online in both English and Spanish.
Full of interactive news and feature stories, the issue is now live on the SCORE website at www.SCOREInternational.com and is available through SCORE social media channels as well as a direct link at http://read.uberflip.com/i/1222845-score-journal-mar-2020/0?m4=.
In this colorful 105-page edition, besides the diligently detailed look at the Wheel Buyers Guide for desert racing, this month’s issue also has an extensive preview of the season-opening 34th annual SCORE San Felipe 250 along with a fabulous feature on the late SCORE racer Pete Sohren who is being honored posthumously as the honorary Grand Marshal of his favorite race. ‘Pistol’ Pete will be represented by his family at the event. 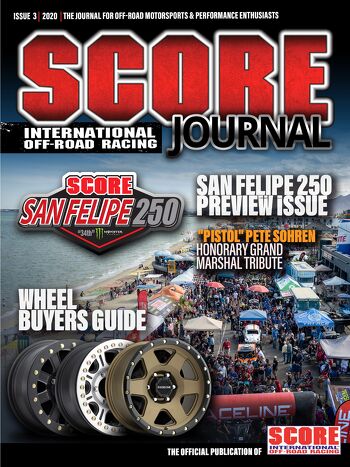 WELCOME
“Our March issue is clearly focused on a major preview of the season-opening SCORE San Felipe 250 which has been postponed to May 6-10 as the world continues to fight the battle to stop the spread of COVID-19,” stated Jim Ryan, SCORE Marketing and Sales Director and publisher of the SCORE Journal. “We also have our extensive annual SCORE Off-Road Wheel Guide and multiple interesting features including a major one on ‘Pistol’ Pete Sohren being posthumously recognized as the honorary Grand Marshal of this year’s SCORE San Felipe 250.
“In addition to the detailed Off-Road Wheel Guide, we have our regular new products section for the enthusiast and the racer.”
CLIMBING HIGHER
The SCORE Journal digital magazine, reaching an average of nearly 2 million unique viewers per issue, 62,120,121unique page views with an average engagement time of over 27 minutes is a major element in the continuing media expansion that SCORE has implemented. The continually revamped SCORE website also generates an average of over 2 million monthly unique viewers.
SPECIAL NUMBERS
The SCORE Journal digital magazine’s October 2019 (SCORE Baja 1000 preview) issue delivered a record 2.89 million unique viewers/readers. The Spanish version of that SCORE Journal issue recorded over 502,000 unique viewers/readers.
The SCORE website for the race week of the 52nd SCORE Baja 1000 in November of last year had a record 2.7 million unique viewers. The increase was fueled by the expanded live tracking, live streaming, the Weatherman audio feed and race info updates.
During race week for last year’s SCORE Baja 1000, SCORE Facebook generated 537,609 views and the SCORE App had 552,443 total sessions in that window.
And the SCORE Journal’s March 33rd SCORE San Felipe 250 (2019) preview issue was viewed by 1,810,444 unique viewers and our Spanish language edition of the SJ generated over 190,000 unique viewers.
INSIDE VOL. 6, NO. 3
Vol. 6, No. 3 of the SCORE Journal is once again filled with numerous interesting worth-reading features, stories, captivating images, exciting videos and several news items.
This edition is anchored around a solid preview of the season-opening 34th annual SCORE San Felipe 250, Round 1 of the four-race 2020 SCORE World Desert Championship.
Highlighted in this issue is the annual SCORE Off-Road Wheel Guide spotlighting several different manufacturers.
Expanding the coverage, the March SCORE Journal also includes tips from SCORE sponsor RACELINE Wheels on wheel mounting and fitment.
Another pictorial review is of the 2021 Chevrolet Colorado ZR2 that is ready for SCORE Baja racing as well as Colorado ZR2 Parts Guide.
The lead feature is on the late SCORE champion racer Pete Sohren who is being posthumously recognized as the honor Grand Marshal of this year’s SCORE San Felipe 250, the race he loved the most.
Two other features break down the return of two SCORE superstars, David Westhem and John Swift who have combined to form an ultra-competitive truck racing team for the SCORE TT Legend Class.
Among the SCORE News items in the current edition is the announcement on the 2020 SCORE Baja discount program exclusively for the SCORE membership at merchants throughout Baja California alont 2i5h the special $2,222.22 bonus purse offered by Pete Sohren’s family and his Forever Pit Crew for the winner of Class 5 at the SCORE San Felipe 250.
Also part of this month’s SCORE News is a review of the new Baja Big Air Game, the official video game of SCORE International and is available for free on the Apple App Store and Google Pay.
The Off-Road Marketplace in this issue continues to shine brightly on the latest new products for racers and enthusiasts.
SCORE JOURNAL
The SCORE Journal, launched in 2015, is published as 12 monthly online digital magazines, which includes four print editions that are available as the SCORE race programs at the four events that comprise the SCORE World Desert Championship along with another print edition for the annual SCORE Awards Night.
The SCORE Journal Monthly Digital Magazine features exclusive editorial, enhanced race action videos, expanded and interactive race coverage, interactive product reviews, insider interviews with drivers, tech stories, driver and team profiles, race narratives and analysis, exclusive long and short form video programming, race results, updated stats, studio photography, class overviews, unmatched access to SCORE’s historical archives and much, much more.
EN ESPANOL!
The SCORE Journal features a Spanish language edition of the magazine on the SCORE website. Spanish-speaking individuals represent nearly 20% of the SCORE Journal unique reader base. The link may be viewed on the menu of the SCORE Journal Magazine tab on the SCORE Website. The Spanish language version of the SCORE Journal will be posted within the week of the English version.
SCOREscope
2020 SCHEDULE
Here is the four-race 2020 SCORE World Desert Championship and for the fifth consecutive year all races will be held in Baja California, Mexico: